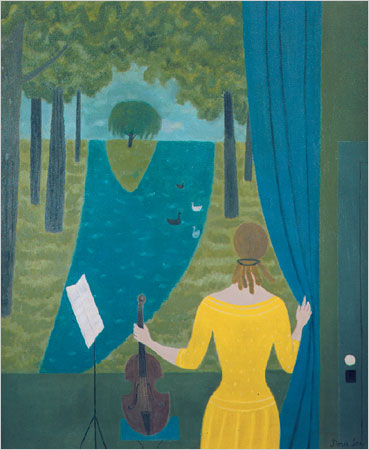 One of the most successful female American artists of the Depression era was Doris Lee -- the featured artist for August in my Woman Artist Series.  Painter, illustrator, and designer -- Doris Lee became famous for her Depression-era murals and depictions of everyday life. 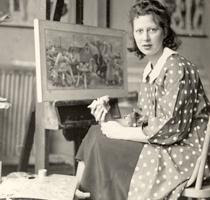 Here are 10 things to know about Doris Lee, along with photos of her paintings and images of the artist . . .

1.  Born Doris Elizabeth Emrick in Aledo, Illinois, in 1905, Lee graduated in 1927 from Rockford College, where she majored in art and philosophy.  Lee described her upbringing as that of an "outdoorsy gentlewoman" and attended Ferry Hall School, an upscale prep school for girls, nearby in Lake Forest, Illinois, from 1920-22.

The fourth of six daughters, Lee grew up in an extended family that included her grandmothers and great-grandmothers, her cousins, and her aunts and uncles.  Lee remembered how her extended family nurtured her interest in art.  "They were always making things -- painting pictures, carving frames, quilting, building furniture, and nursing a great variety of plants and flowers."

Though Lee was exposed to and always interested in art, she was encouraged by her father to obtain a general education.  But, after receiving her degree in philosophy from Rockford College, she returned to her true passion of art. 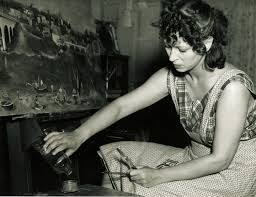 2.  After her graduation from Rockford, at the age of 22, Doris Emrick married Russell Lee -- a chemical engineer who later became a noted photographer with the Farm Security Administration.  During their honeymoon year abroad, Lee studied painting in Paris and Munich.

Following the couple's return to the US, she continued her studies.  She enrolled in the Kansas City Art Institute in 1929, to study painting under the American Impressionist, Ernest Lawson.

While in San Francisco the following year, Lee trained under Arnold Blanch at the California School of Fine Arts.  (Blanch would later become her second husband.) 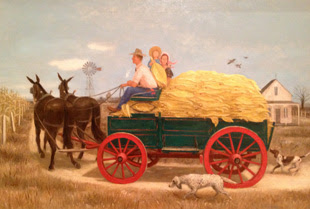 In the 1930's, Lee's career developed and she began to exhibit at prestigious institutions.  The couple led a happy life that was filled with their passion for art and painting.  She maintained a New York studio on East 14th Street.  In 1931, at the suggestion of their mutual friend Arnold Blanch, the Lees relocated to Woodstock, New York, to live in the Maverick Art Colony. 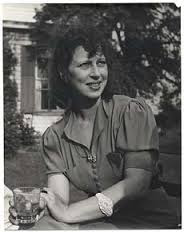 3.  Lee's career took off in 1935, when her painting, Thanksgiving, won the Logan Prize, in the annual show at the Art Institute of Chicago.   This was her earliest major career achievement.

Her bustling scene of women preparing a Thanksgiving feast became the object of national headlines when it was first exhibited at the Chicago Art Institute, and won the prestigious prize.  The award also brought controversial attention.  Josephine Logan, the donor of the prize, condemned the work's broad, exaggerated style.

While Logan, and other critics, found the painting's subject provincial and cartoon-like, it was hugely popular with the public.  The themes of Thanksgiving, rural customs, and family life, which Lee painted in a deliberately folksy manner, had great appeal to a country still in the midst of the Depression.  Thanksgiving has been recognized as one of the most popular nostalgic views of this American ritual since that time. 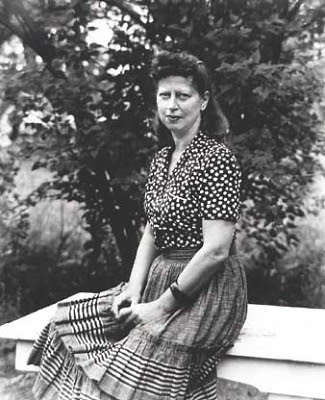 4.  During the 1930's, Lee was commissioned to create several murals by the U. S. Treasury Department.  In 1937, Lee painted two murals in the General Post Office in Washington, DC, and another in the Post Office in Summerville, Georgia.

This was an impressive accomplishment for a young woman, struggling for acceptance in the male-dominated art world of that time.

These murals were part of the Great Depression Relief Program.  Lee painted four murals for that project -- two for each federal post office selected.  Georgia Countryside is in the post office of Summerville, Georgia.  This was a very realistic painting that captured both black and white people of Georgia, out in a field, tending to their crops.

5.  While Russell Lee was on his cross-country travels, the couple's marriage dissolved and Doris fell in love with artist and teacher Arnold Blanch, the couple's long-time friend.  In 1938, the Lees divorced, and Blanch got divorced from his wife, in order to be with Lee.  In 1939, the two married.


After her marriage to Blanch, the couple spent summers in Woodstock, and in the winters, took trips through Florida, ending in Key West.  For many years, they lived and worked in Woodstock, NY, and for awhile, Lee maintained a studio in New York City, as well.  Together, Lee and Branch devoted many years to teaching at colleges and universities around the nation.


6.  Although Lee had her roots in Illinois and spent her last years in Florida, she had a special connection with the Hudson River Valley -- most importantly, the Maverick Art Colony in Woodstock, NY.  The scenery and environment of the colony nurtured her creativity.  Without the help of the many other artists and the artistic environment that existed in Woodstock, Lee probably would not have achieved the same level of success that she did in the 1930's and 40's.

The Maverick Art Colony attracted painters, sculptors, writers, and musicians.  Hervey White, one of its founders, established the Maverick Press in 1910, in order to help himself and other writers get their works published.  A lithograph press for artists was also installed soon after.  Over the years, the Maverick Colony produced many well-known and accomplished artists, including Doris Lee. 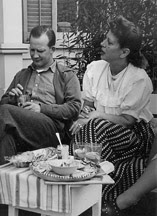 Lee made her permanent home in Woodstock, in 1931, and established herself as a leader and a vital part of that important artist's colony, and a frequent host to other artists.  In the early 1930's, Lee entered the Woodstock Artists Association shows and was able to showcase her work.  Her paintings were met with great success.


7.  During the 1930's and 40's, Lee reached her peak of popularity with works published in magazines, the murals in the federal post offices, and paintings displayed in the nation's most renowned museums.  In that time, Lee produced many works, of all different styles.  Winter in the Catskills, inspired by her life in the Hudson River Valley, is in the collection of the Fine Arts Museum of San Francisco.  This and Country Wedding are both lithographs, which she created for the Associated American Artists.


Lee regularly exhibited in New York at museums and galleries, and was artist-in-residence at many
art schools.  She taught at Michigan State University and Colorado Springs Fine Arts Center, and she also worked as a magazine and book illustrator.

Her paintings of rural America were included in prestigious exhibitions and acquired for museum collections. Lee's paintings were exhibited in the first Whitney Biennial Exhibition in 1932.   In 1937, the Metropolitan Museum of Art acquired her painting Catastrophe for its permanent collection -- an additional boost to the artist's fame and prestige.  The 1930's ended with a flourish when Lee was invited to exhibit in the 1939 New York World's Fair and the San Francisco Exposition.

The 30's marked the beginning of a long and productive career for Lee.  Her work included paintings, murals, lithographic prints, illustrations.  Throughout her career, Lee's popular and appealing work appeared on greeting cards, calendars, menus, pottery, and fabric design.  Lee's work from this period concerned life in rural America.  She portrayed the simple joys of American life in touching, nostalgic, and sometimes fanciful ways. 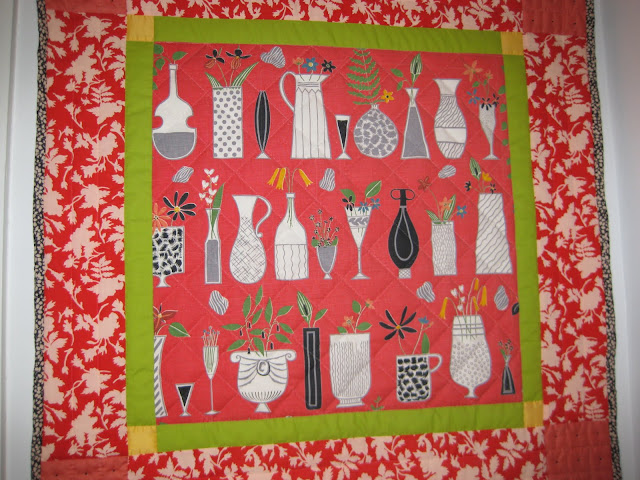 8.  Throughout her career, Doris Lee sought to portray everyday, contemporary American life in a style that was easily understandable to her viewers.  Lee is most well-known for her ability to capture the small, ordinary elements of life in her paintings, with amazing detail and sincerity.  Lee has been acknowledged as "a recorder of rural life, who had an obsession with detail". 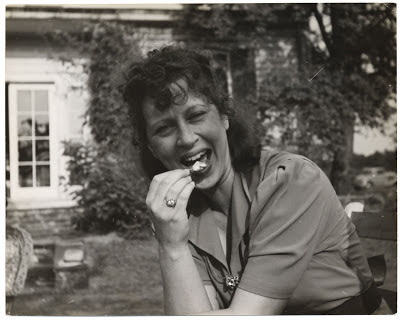 Her 1930's work was executed in a style that accepted traditional principles of form, volume, depth, and color.  Lee's work is both intimate and charming, because of her sophisticated, yet innocent, touch.  Lee's style developed through a unique fusing of Regionalism (1930s), folk art (1940s), and abstraction (1950s).


Lee was painting at a very difficult time in American history, when the country was suffering from the Great Depression, and then was fighting in World War II.  By painting the simple things in life that meant a lot to people -- like family and special occasions -- Lee was able to refocus people's minds.  She was able to use the Great Depression as a source of inspiration.

As Lee became interested in folk art in the 1940's, as well as Chinese art and poetry, she began to reduce forms to the two dimensions and ignore accepted principles of depth, perspective, and realism.  American folk art became an important source of inspiration in Lee's paintings. Her simple, flat paintings portrayed individual figures, gardens, seasonal landscapes, and women and children on the beach. 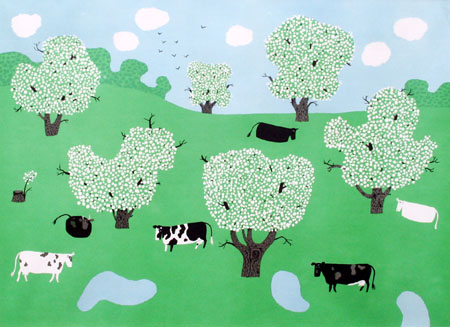 As an early collector of folk and Pre-Columbian art, Lee found the simplified forms and flattened decoration of these arts helpful, in her pursuit of combining abstraction and realism.  Her 1950's work offers an even more reduced composition of bold forms, as seen in her Vine Series.  The work became even more stylized -- more concerned with pure form and color. 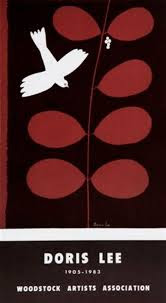 9.  Doris Lee was a well-traveled woman, who had gained immense popularity around the world.  During the late 1940s and early 50s, Lee undertook several commissions for Life magazine, including travel articles and illustrations that took her to such far-off locales as North Africa, Cuba, and Mexico. 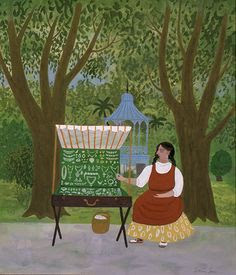 Trips to Hollywood in the winter months of 1944 and 1945, for Life, resulted in a series of paintings for two movies:  Oklahoma, and The Harvey Girls.


She was also commissioned by Life to portray the city of Hollywood in art. The Dayton Art Institute in Ohio is now home to Grauman's Chinese Theater, 1945.


This painting was completed at the height of Lee's popularity, and was one of her last works painted in a realistic manner -- before moving into more abstract paintings in the late 1940s. 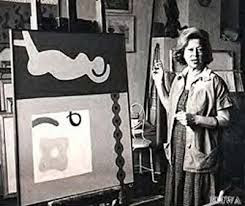 10.  In 1968, Lee was diagnosed with Alzheimer's disease.  But, over the next 15 years, she continued to produce art, although her health steadily declined. 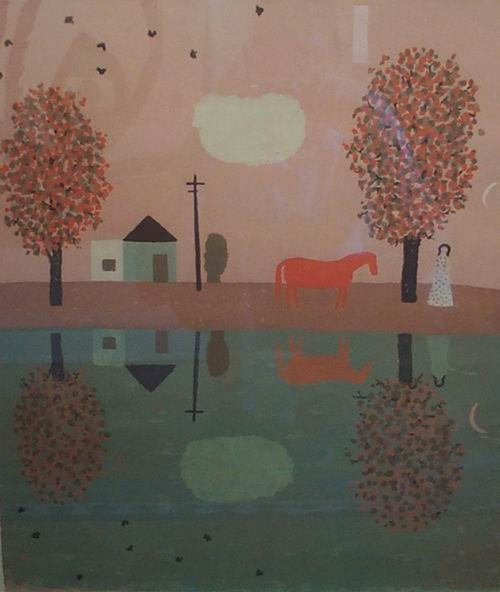 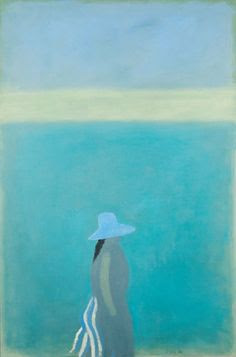 One year after her death, the Woodstock Art Association mounted a retrospective exhibition of Lee's work.  Lee stands out as one of the most successful female painters from the Woodstock art colony. 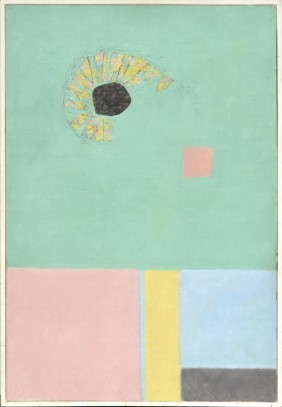 Doris Lee has retained a unique position in American art, as her work is accessible and evokes highly personal responses from her viewers.  Painting during the Great Depression of the 1930s and WWII, in the 1940s, Lee aimed to lift her viewers' hearts and minds to a better world, by reminding them of life's simple pleasures. 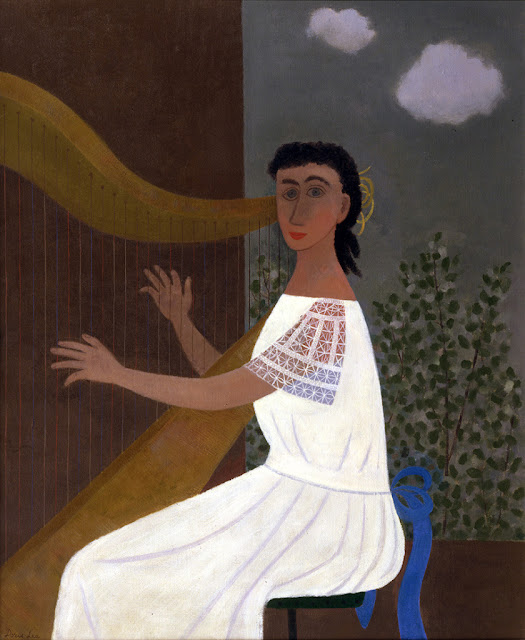 Posted by The Painted Prism at 6:40 PM