The featured artist for March, in my Woman Artist Series, is: 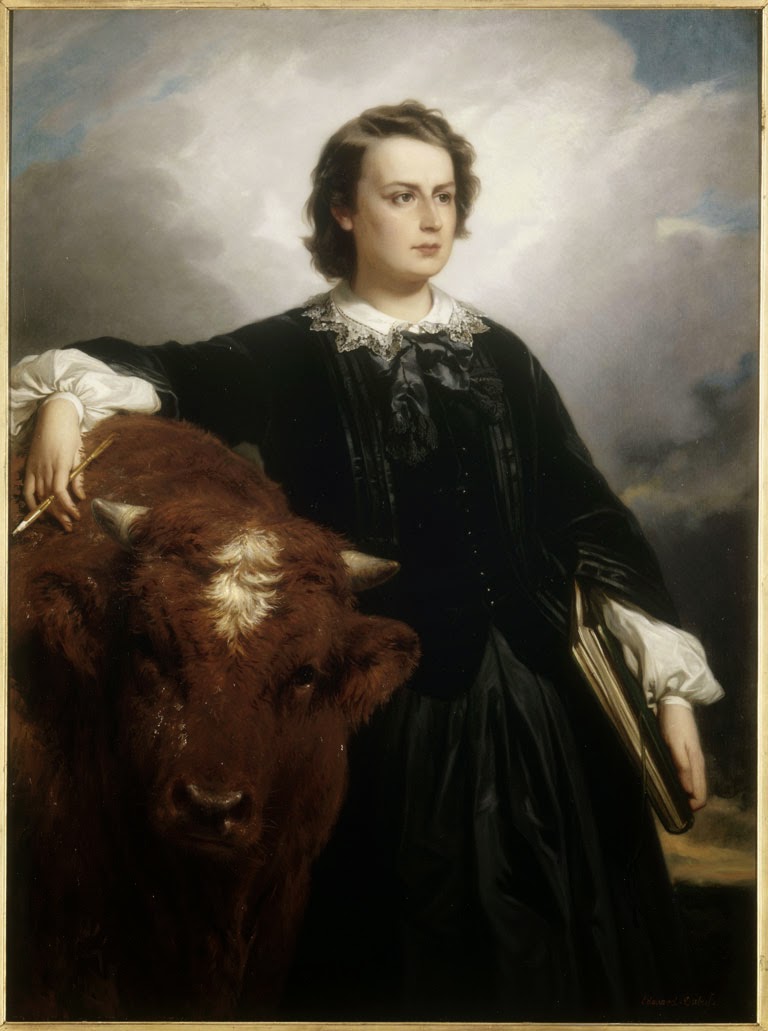 Here are 10 things to know about Rosa Bonheur, along with 10 examples of her work and 10 images of Rosa, too: 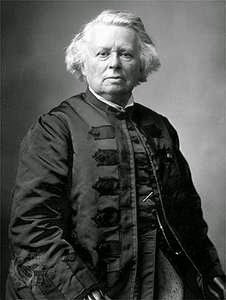 2.  Born in Bordeaux in March of 1822, she became interested in painting and sculpting animals from an early age.  As a young girl, Rosa drew in the parks and at the horse market.  She was taught by her father, Raymond Bonheur, the naturalist landscape painter and humanitarian.  She also attended a Saint-Simonian school, dedicated to feminist socialism, since, she said, "my father did not want me to remain altogether ignorant".  As a teenager, she copied paintings in the Louvre -- works of Poussin and Paulus Potter.  All three of Rosa's siblings became artists specializing in animals. 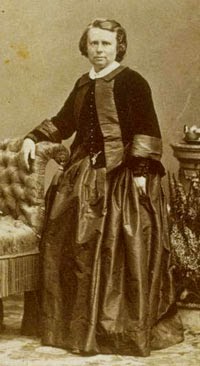 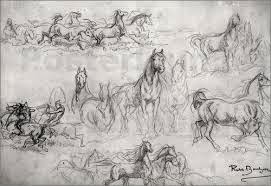 3.  Bonheur was so concerned with anatomical accuracy in her paintings, that she regularly visited slaughterhouses, where she dissected carcasses.  She also visited horse fairs and cattle markets and observed and sketched animals at work in the countryside.  She even lived on a farm in 1845, so that she could study and sketch the animals at close hand. 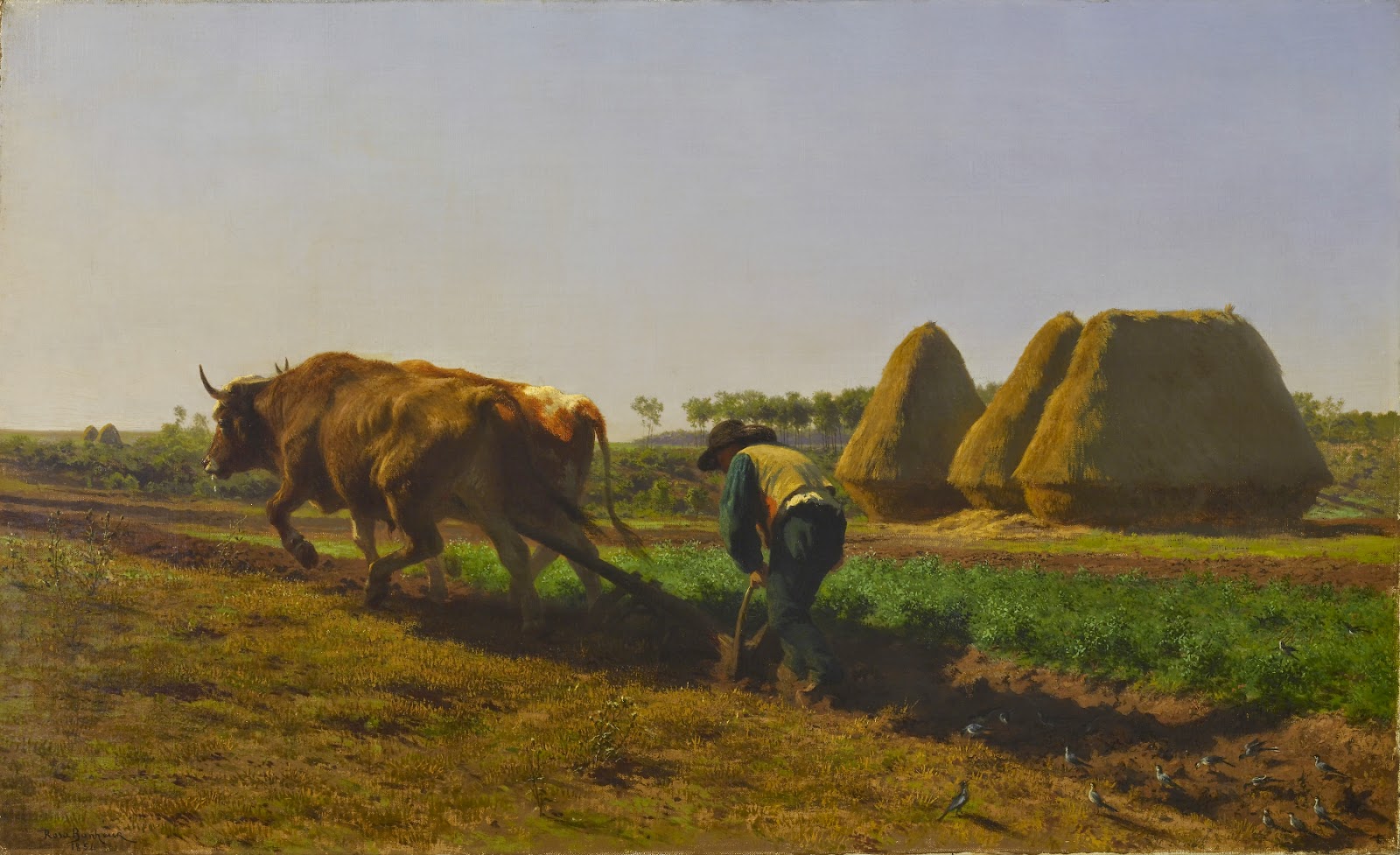 4.  Rosa's studio,  at Rue de l'Ouest, was a sensational menagerie and attracted countless visitors.  Living and stuffed creatures -- cows, eagles, a horse, sheep, and a number of smaller ones -- shared her studio with her. 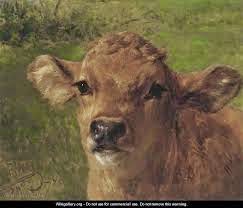 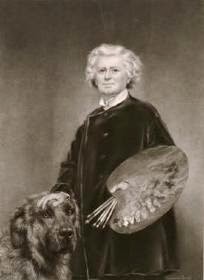 5.  Granted official permission, Rosa went around in men's clothing (particularly, "trousers").  Going against the prevailing norms for women, she also cropped her hair short, smoked cigarettes, lived independently, and rode astride horses, rather than side-saddle.  She needed, and received police permits, for her trousers, which needed to be renewed every 6 months.  Rosa achieved unqualified success, despite her blatant nonconformity.  By the time she obtained the official permission to wear male attire -- which was more practical for attending horse fairs, cattle markets, and other un-ladylike venues -- she had already won critical acclaim. 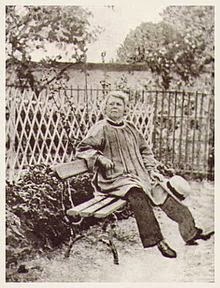 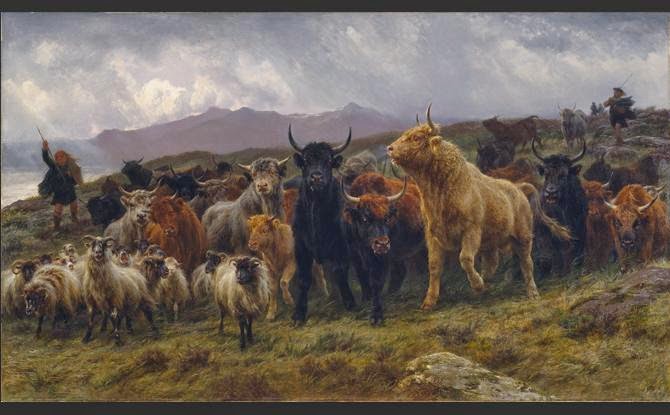 6.  She never married and lived an unconventional lifestyle, with 2 different female companions, both painters.  No one interfered, since she was so valued as an artist who could do such beautiful and authentic portraits of animals.  So, even when she shared a household with Nathalie Micas, from her mid-30's; or when in her later years, (after Nathalie's death) with young American painter, Anna Klumke -- it did not make headlines.  One critic wrote, after the Salon of 1847, "Mademoiselle Rosa paints almost like a man!" (the supreme compliment, no doubt).  Anna became Rosa's sole heir.  This portrait of Rosa was painted by Anna: 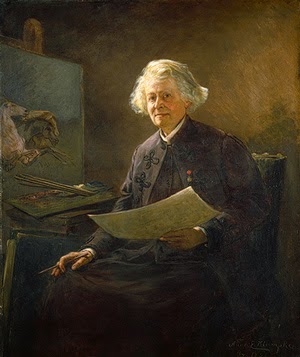 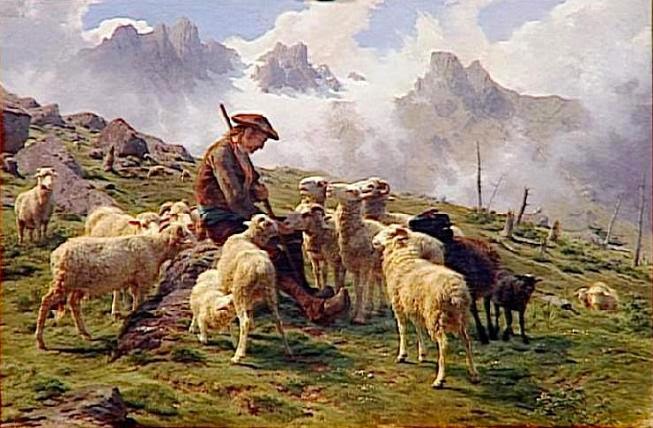 7.  "The Horse Fair" was the monumental painting which brought her international fame.  This 8 ft. x 16 ft. painting was a gripping, animated composition that emphasized motion.  It was set at a horse fair that Bonheur had been visiting for about two years.  The critics were enthusiastic, and it definitely caught the public's eye in Paris. This enormous canvas was the hit of the 1853 Salon and was certainly Bonheur's masterpiece.  (This mammoth painting now dominates the 19th century gallery at New York City's Metropolitan Museum of Art.

8.  Rosa Bonheur's dealer, Ernst Gambart, was a marketing genius, and it was largely because of him that her reputation grew well beyond France.  Gambart bought the monumental "The Horse Fair" for 40,000 francs, plus reproduction rights.  He had it duplicated as an engraving, and then put it on display in London, after Queen Victoria gave it her blessing in 1855.  The 33-year old artist became famous throughout France, England, and even in America.  Victoria had it brought to Windsor Castle for a private viewing, attracting even more attention to Bonheur's work. 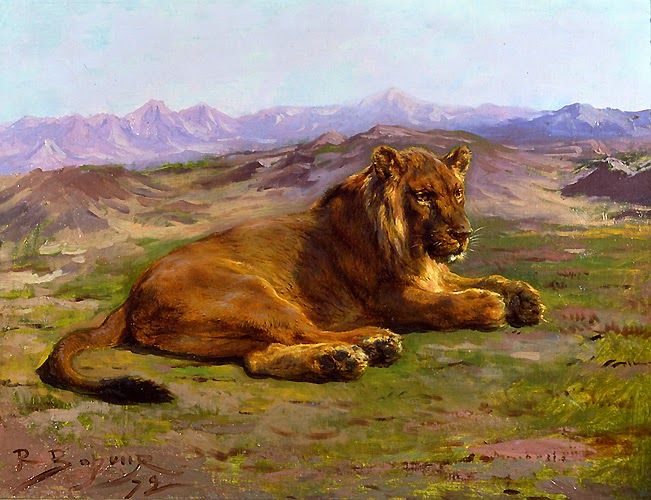 9.  Back in France in 1860, Rosa purchased the country retreat, Chateau de By, near the edge of Fontainebleau Forest.  She was joined there by her exotic menagerie of animals, plus two lionesses -- a gift from Gambart.  One, named Fathma, was as tame as a lamb.  In her later years, bison became a favorite subject to paint.  Her collection of animals also included Icelandic ponies, gazelles, and yaks.  When Buffalo Bill Cody was touring France with his Wild West Show, he came to Chateau de By for a visit,  where he presented her with two mustangs from his Wyoming cattle ranch -- a gift she particularly valued.

10.  Throughout her life, Rosa received awards and honors, beginning with a medal for "Oxen of the Cantal" in 1848.  In 1865, Rosa Bonheur became the first woman artist to receive the French Cross of the Legion of Honor, presented to her by the Empress Eugenie.

Rosa lived out her days at the Chateau de By, and died there in 1899. 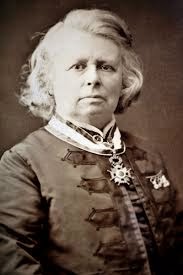 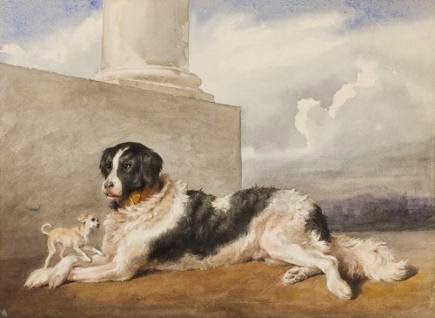