An Italian painter, who was prominent in Europe during the Baroque period, Giovanna Garzoni is the featured artist for February, in my Woman Artist Series.  She is considered to be one of the greatest Italian miniaturists of the 17th century.

She has been a favorite of mine for a long time -- and has been a huge influence on my own work.  One of the first women artists to practice the art of still life painting, Giovanna Garzoni pursued her career with intensity.

Here are 10 things to know about Giovanna, along with images of her beautiful paintings:

1.  Born in 1600 in Ascoli Piceno, in the Marche district of Italy, Garzoni's talent was first noticed when she apprenticed with a pharmacist in her hometown. 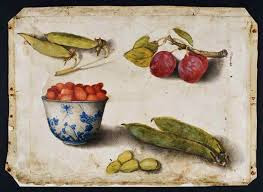 Her parents, Giacomo Garzoni and Isabetta Gaia, were of Venetian origin and both came from families of artisans -- but were not artists themselves.  They could provide no training for their daughter, as was typical for many women artists of the period -- but she received some art training from her uncle, Pietro Gaia, a painter, sometime before 1615.

2.  After residing in Rome for the first 15 years of her life, in 1616, Garzoni started her art career when she accepted a commission from chemist, Giovanni Vorvino of Rome, to paint a herbarium. 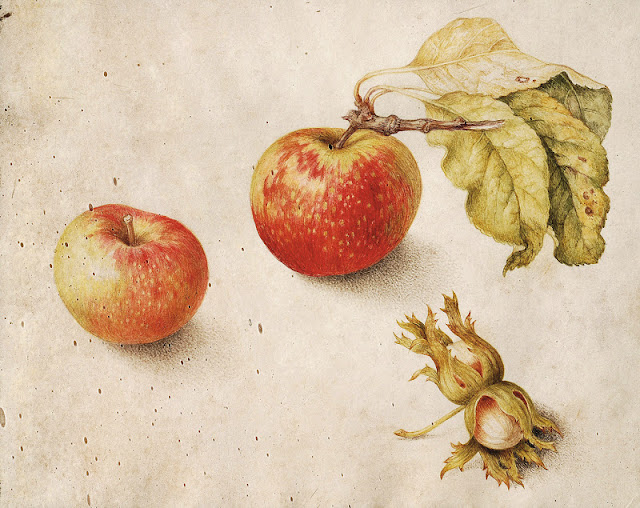 Four years later in 1620, Garzoni arrived in Venice and painted Saint Andrew for the Venetian Church.  Garzoni stayed in Venice for a few more years and during that time, attended the Calligraphy school of Giacomo Rogni.  Shortly after her studies with Rogni, Garzoni produced a book of cursive characters.  This early work, a 1625 calligraphy book, included capital letters illuminated with fruits, flowers, birds, and insects. 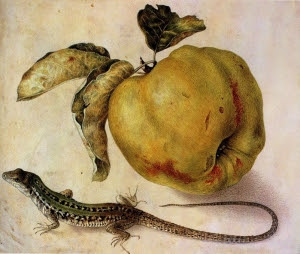 She was also influenced, artistically, by Jacopo Ligozzi, a fellow botanical painter -- but, any more details about Giovanna Garzoni's art training are unknown.

3.  In 1622, Giovanna married the Venetian artist, Tibero Tinelli, but the marriage only lasted for two years, due in large part to her vow of chastity.  She was often called the Chaste Giovanna due to her vow to remain a virgin. 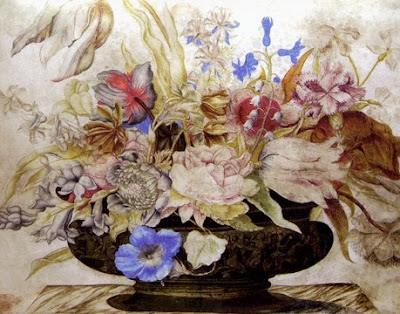 Tinelli and Garzoni separated in 1624.  There were others who suggested that Garzoni's father, Giacomo, suspected that his son-in-law was practicing witchcraft and magic, and encouraged his daughter to end the marriage.  The marriage ended by annulment, rather than divorce, because they had never consummated their marriage.

4.  In 1630, Garzoni left Venice for Naples, along with her brother, Mattio -- where she worked for the Spanish viceroy, the Duke of Alacala.  The artist was 30 when she moved from Venice to Naples.  She painted numerous miniatures for her patron, the Spanish Duke of Alacala. 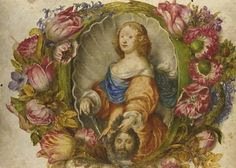 She professed to being unhappy in Naples, preferring to work and die in Rome.  So, Garzoni remained in Naples for only one year, until she moved to Rome in 1631. 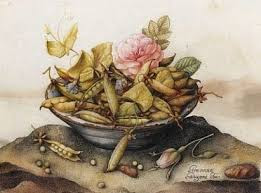 Garzoni is notable for being one of the few women who opted to travel throughout Europe and receive an education during the 17th century, instead of settling down and starting a family.  She would travel with her brother, Mattio, throughout her career as an artist.

5.  Garzoni's stay in Rome was short lived, because of Christina of France's persistent efforts to have the artist come to Turin, to serve as the miniaturist for the court of Turin.  So, when the Duke of Alcala returned to Spain, Garzoni used the opportunity to accept the invitation of Christina and the Duke of Savoy to move to Turin.

Garzoni reached Turin in 1632 and lived and worked there for five years.  In 1637, the commencement of the War of the Two Ladies forced her to leave. 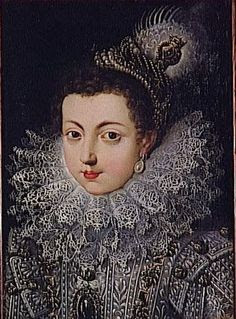 6.  Garzoni traveled back and forth from Rome to Florence, until 1651, where her primary client became the prominent Medici Family -- particularly Grand Duke Ferdinando II and Grand Duchess Victoria.  She was the official miniaturist painter at the court of the Medici in Florence, in the mid-17th century. 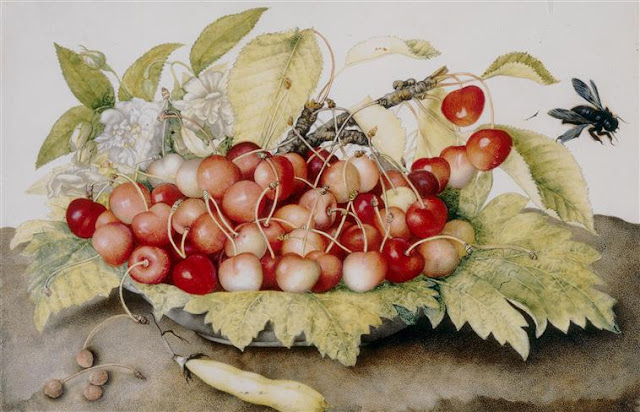 Garzoni's refined interpretation of plants and animals suited the taste of her aristocratic patrons, like the Medici family, and could be found decorating their villas.  She painted many botanical and zoological specimens for the Medici court. 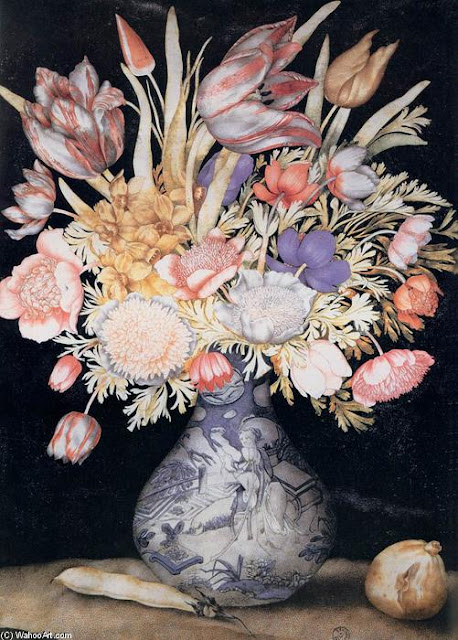 Many of her surviving still-life paintings were commissioned by Medici patrons, chiefly Prince Leopoldo and Cardinal Giovan Carlo. 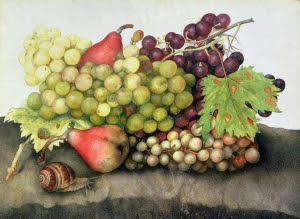 7.  After serving the Medici Court, Garzoni decided to settle in Rome in 1654 -- where she renewed her activity with the Academia di San Luca, an association of artists, founded in 1593. Although it was not customary to admit women to the organization, she enjoyed many of the same benefits as male members (including cakes brought to her when she was ill). 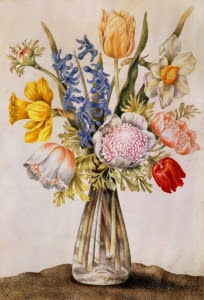 8.  While Garzoni earned success during her lifetime for her miniatures, only a few examples of those survive.  It is her carefully rendered watercolor still-lifes of flowers and fruit, and her portraits, that have earned the artist lasting recognition. 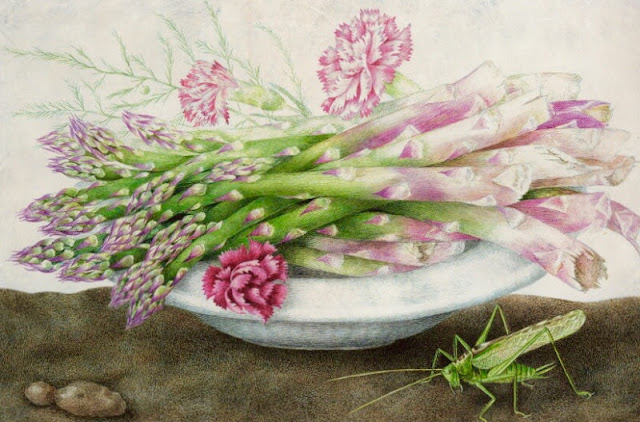 These botanical subjects were to become her specialty, and what she became famous for -- and tempera on vellum was her preferred medium.  Her use of watercolor, gouache, and tempera, instead of oil, adds a sense of delicacy and immediacy to the paintings.  Also, the inclusion of insects, birds, lizards, shells, and even mice, serve to further enliven the compositions.  Her works have a fresh presence and almost surreal quality that explain her immense popularity in her own day. 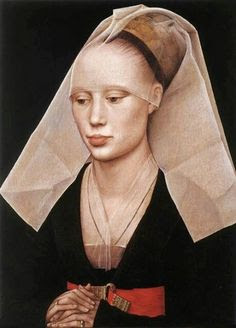 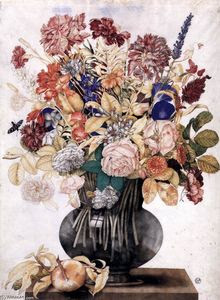 9.  Although her artwork was critiqued by her contemporaries for its subject matter (portraits and still-life were viewed as lower forms of art, in comparison to figure painting and historical themes), Garzoni's paintings were hugely popular among her clients.  In fact, her paintings were so well-received that she could sell her work "for whatever price she wished". 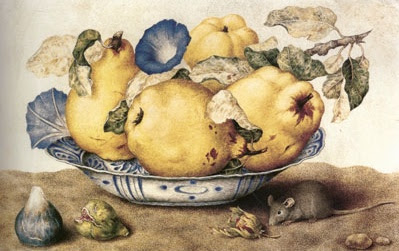 Her fame and skill also endowed the artist with a large degree of autonomy.  She had the option of working with various patrons throughout Italy, and she also traveled to London and Paris. 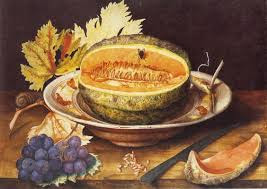 10.  In 1666, prior to her death, Giovanna devised a will that left her estate to the Church of Santa Martina (the church of the Academia di San Luca), on the condition that she would be buried in the church. 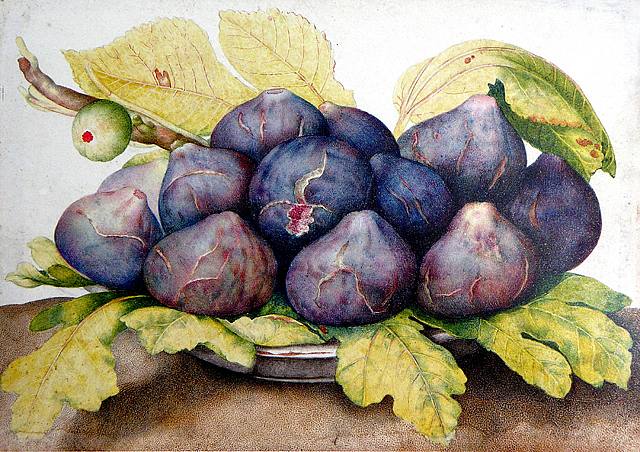 Garzoni died four years later in Rome, in February of 1670, at the age of 70 -- after enjoying a life of steady work and constant success. 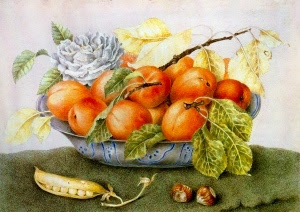 Today, Garzoni's tomb remains at the Church of Santa Martina, but it was not interred there until 1698, nearly 29 years after her death.

Along with her tomb, is a portrait of Giovanna Garzoni, by Roman painter, Giuseppe Ghezzi. 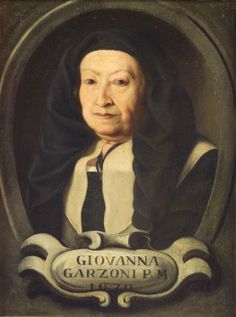 I had the good fortune to visit the Pitti Palace in Florence, Italy, two years ago, and was able to see some of Giovanna Garzoni's beautiful paintings. 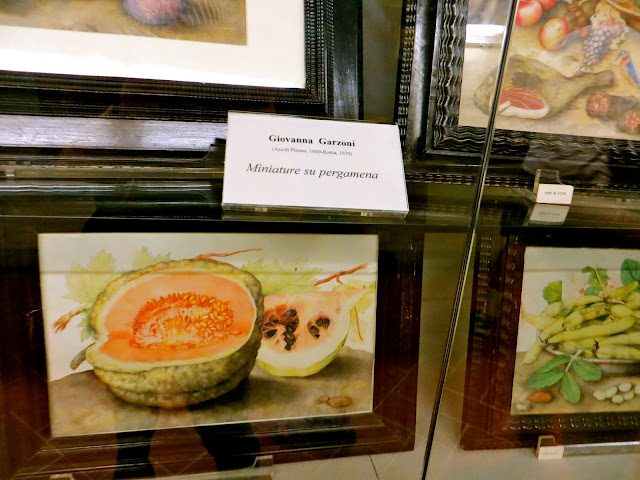 Since they were enclosed in a glass cabinet, I didn't get the best pictures . . . but, it was fun to see them, "up close and personal"! 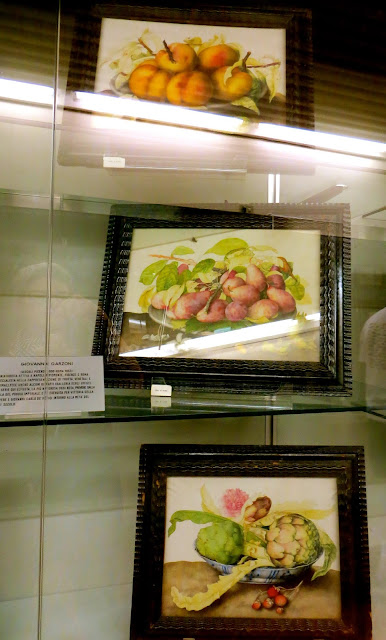 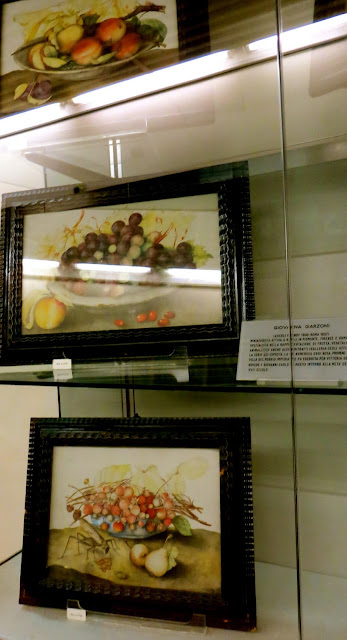 Posted by The Painted Prism at 4:31 PM